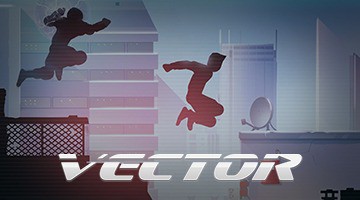 Vector is a 2010 platform game that exists on both Android and iOS. It was developed by a Russian studio called Nekki, which also developed the series of Shadow Fight, Lintrix, and the sequel to Vector. Vector is a single-player arcade-parkour-style game. Vector is an exciting arcade-style game featuring you as the exceptional free-runner who won’t be held down by the system.

In this game, players will act as the main protagonist that may vary on the game modes. The game has various locations and stages wherein it all started from the main character from the very prologue of the game by which the players have been revealed to be the man in an Orwellian dystopia, no longer be able to bend to the will of his masters.

There are different game modes wherein you will claim the role as the opposite silhouette of the game and known to be the Big Brother stating that your challenge will be capturing the main silhouette while collecting bonuses and performing tricks that you bought at the first game mode. There will be an invite wherein you will intentionally fail some obstacles to collect some bonuses and to arrest the protagonist on-time that will lead the stage to be more challenging and troublesome, depending on what may alter.

The game has received mixed reviews from various critics with a score of 8/10. One reviewer said that the game is a fantastic free-running simulation with plenty of love but can be a bit repetitive at times. Another reviewer said that it is an impressive game but needs to include better social features. Overall, the Vector’s playability makes up for its lack of innovation.

The game received a 2016 sequel titled Vector 2 that continues the storyline of the original game. The protagonist from the first installment was eventually captured by security forces, but, instead of killing him, the antagonists decide to use his skills to test some new equipment in a secret research facility.

After the end of the storyline in Vector 2, players and fans have been waiting for the release of the next title, Vector 3. However, Nekki decided to create another game similar to the Vector Franchise that used a silhouette as the main protagonist. That game became a fighting game titled Shadow Fight, released exclusively on Facebook in 2011. This spiritual successor to Vector eventually became a trilogy, spawning two sequels that became available on iOS and Android in 2014 and 2017.

Like you, we hope too to have some official intel on the future of the Vector Franchise.