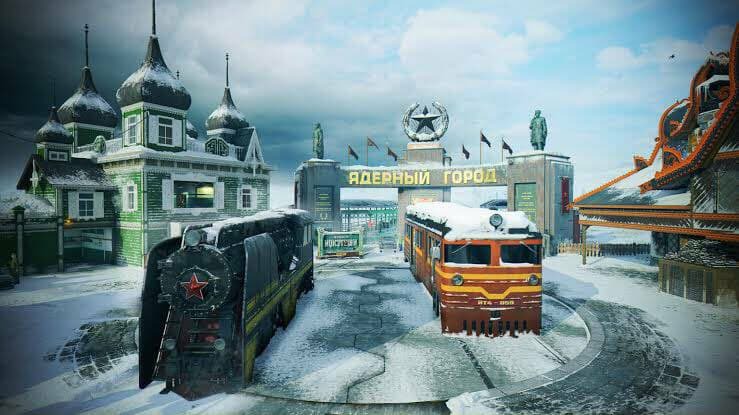 Winter is here. Call of Duty Mobile Season 13 – Winter war is live and running as we speak. Players all across the world are plowing through the snow to grind and unlock all the rewards which the Battle Pass has to offer.

Now that Season 13 is live, Activision had previously teased us with a Remastered version of the Nuketown map. Just like Call of Duty Black Ops Cold War, Call of Duty Mobile is about to be handed some changes in Season 13. The most important change is a brand new winter-themed Nuketown Map.

Yes, folks! You read that right. The highly-anticipated Nuketown Russia has arrived in Ranked multiplayer mode in Call of Duty Mobile. It has replaced the original Nuketown Map, which was quite obvious.

The map has undergone quite a lot of changes. For example, instead of the Ambulance and the School bus at the center of the map, we can now find 2 trains/freight at the center. Apart from that, instead of grassy lawns, you can find snow-covered land all across the Nuketown Russia map.

This is going to quite a map to try out. So, without delaying much further, we would suggest you go ahead and get a first-hand experience of the Nuketown Russia Map for yourself in an action-packed Ranked Multiplayer match.