Brawl Star has already been producing several ripples in the mobile phone games industry since the first day of its release. The players find this game fun and exciting to play. Brawl Stars has attracted the attention of a lot of players because of its interactive and fun environment.

Currently, Brawl Stars has entered into its 6th Season and players are going crazy over it. Be that as it may, the number of Brawlers available coupled with their Supers and Abilities has become quite overwhelming for most players.

So, in this article, we continue our list of the top 10 Brawlers. Today we bring you guys out a compilation of some of the most efficient brawlers for Showdown in Cavern Churn map.

The map has a bush-dense central area and appears to lack an empty area. There seem to be dozens of walls to stay hidden behind or hunker down, and the Power Cubes boxes are primarily in the center or in some instances, the corners of the map.

Bushes that are not in the core of the map are only detected in tiny clusters and have little or no influence on the map’s gameplay. 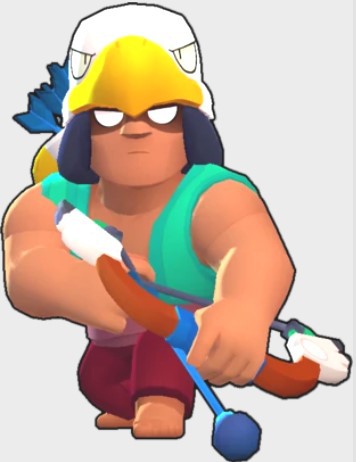 Bo is really quite helpful throughout this map as his Circling Eagle Star Power could very well enable him to see other players hidden in the bushes in the middle of this map, enabling him to regulate the central area and eradicate others with minimal effort. Gale mostly with his Gadget Spring Ejector could be beneficial on this map. He could indeed plant his launchpad within the bushes, attempting to make it so that opponents who stroll into it would therefore be hurled out of the bushes. This could also be deadly to both you and your duo partner if you’ve conveniently forgotten where you positioned it.

If Gale needs a bit more time for this configuration, he could use his Star Power Blustery Blow, in tandem with the launch pads. He could also use his Gadget to make an enemy reluctant to traverse the launch pads and bait them in the poison clouds for several seconds.

Tara’s Gadget Psychic Enhancer could be used to pinpoint enemy Brawlers hiding in the massive amount of shrubbery. In addition, her Black Portal Star Power, when triggered, resurrects a shade that can seek out enemies inside the bushy topography of the middle of the map, conceivably marking up the exact location of concealed opponents if they are present.

Rico can be deemed a reasonable selection because of all the walls that his attacks could really ricochet off of as they can find opponents in the undergrowth as well, particularly when using Rico’s first Star Power, Super Bouncy.

Rico’s gadget is also valuable since it fires in both directions, and will help locate enemies in the middle of the bushes. It can also inflict immense damage due to all the walls around the map.

When playing as Shelly, prior to actually accessing the middle bush field, you must charge your Super as much as possible. This encourages you to be prepared for encounters with several other Brawlers who are hiding behind the bushes and waiting to ambush you. However, it is safer to run backward rather than to challenge if you are hit by a thrower.

Being a close-range brawler, bush camping is a good strategy for Shelly. Her Super can be devastating to unwary enemies, and her Fast Forward Gadget can help her to get closer or further away from enemies.

Even though Bull could be conveniently badgered by long-range brawlers, bush camping is an efficient method. If you could somehow creep up on an adversary, Bull’s ludicrously high damage at close-range allows him to acquire the kills seamlessly. He also can both start charging at a long-ranged brawler and strip away the long-ranged benefit their attacker used to have.

Only ever use your Super when required since by demolishing walls, it is far more challenging for Bull to get near to other Brawlers. Tick is among the finest Brawlers for area control. With all that being said, utilize Tick’s mines to regulate a region and put up chip damage to opponents in the middle. Be cautious of his low HP and use his Super to attack Brawlers who get too nearby.

You could use Tick’s Super to just to let you see where the closest Brawler is, particularly when poison gas or other Brawlers drive you into the bushes. Barley stands to benefit from many of the walls encircling the central bush region. The above walls permit Barley to retain attacking Brawlers back whilst also pressuring those same Brawlers towards others.

Remember to try to prevent the center area and middle entryways when moving across the map. When you are forced to the middle of the bush field, don’t hesitate to strike it to expose any secret Brawlers.

His strike mainly deals serious damage which also has a fast-loading speed and also an increased unload speed. It blasts two parallel lasers that ricochet off walls and damage adversaries gravely. Via its super, it draws a supply drop from the air, which massively damages enemies and places a power-up behind it. Seeing as Dynamike could even strike over the walls, he could be used to obstruct the routes of advancing opponent brawlers, handle a region of the map, or hit enemies from far away as well as deal huge damage with his Super Big Barrel O’ Boom.

With Demolition Star Power he can also apply additional damage a cluster of hidden brawlers, behind the bushes.

There you have it – a compiled list of some of the most efficient Brawlers for Showdown in Cavern Churn map. Be sure to try them out and we sure hope they don’t disappoint you and get the work done!