Minecraft has radically altered the multiplayer gaming business. Who would have thought that in this day and age of bloodshed and murder, a game about building blocks and going on adventures would be so appealing?

However, this fundamental concept has included so many aspects that it has become a timeless classic. In Creative mode, you have unlimited resources to build anything you desire.

Survival mode transfers you to undiscovered territories and enables you to travel between planets.

You may either build your own house to hide from the swarms of monsters, or you can create your own arsenal to fight them with.

The best part is that you don’t have to go on your journey alone. You may play on a single server or in your own world with a group of friends.

Every day, vast quantities of fresh material were added to the game as it developed. One of Minecraft’s unique characteristics is the ability to actively code/mod into the game, enabling users to change how it is operated and even control it.

The game may be played on a variety of devices. Choose one of the following methods: The PlayStation 3, Nintendo Wii, Xbox 360, PC, smartphone, iPad, and Raspberry Pi are all popular gaming platforms.

Minecraft allows you to explore, interact with, and even modify a world made up of one cubic meter blocks. All of these phenomena may be classified as part of ecology.

Extremely popular, particularly with primary school students. Every Minecraft enthusiast will enjoy this collection of 15  amazing games like Minecraft.

How to find Pillagers in a Raid

Raiding was introduced in Minecraft 1.14, and it is a mechanism wherein Pillagers invade a Minecraft Village and assault the villagers, attempting to eliminate them all.

It is your responsibility to protect the community from an attack by mercenaries seeking prizes.

Pillagers, on the other hand, may just go without a trace. You’ll be left with a ‘1 enemy remaining’ tally at the top of the display for the rest of the game.

This appears to be something Mojang anticipated could occur, given they made it easy to locate missing foes in the first place. Check out our brief guide below for assistance in locating Pillagers.

Because Pillagers are notorious for going AWOL and being almost hard to locate, a technique for tracking them down has been included in the game. It all begins with the ringing of the bell.

Every Minecraft Town is equipped with a bell, which is normally found in the middle of the village.

If you are unable to locate Pillagers, you may just stand near the bell and strike it. The powerful ringing noise would be heard along with an additional sound as well.

Pillagers will be glowing brightly if you look about at this time. Not just Pillagers in your nearby vicinity, but also ones in the distance.

The ability to view them via walls and topography would also be available to you. Take, for example, the picture below, where you can see a little pillager hidden behind a sandy mountain in the distance. 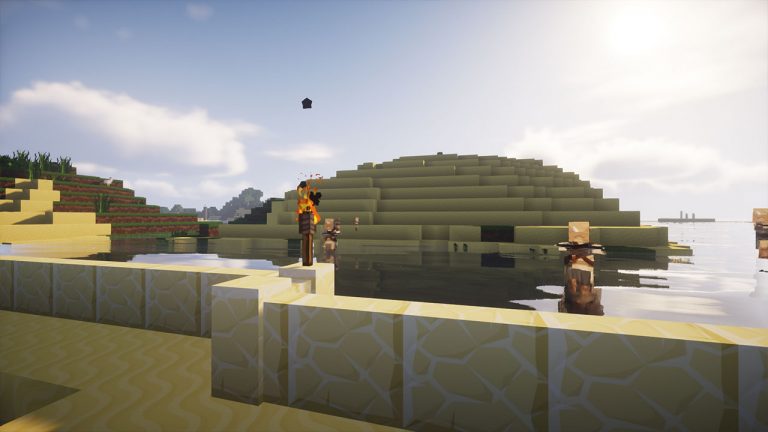 Users may now go to the Pillager’s location, where they should be able to take him out.

There is just one thing to keep in mind about this: since the section when all Pillagers become viewable just lasts a few seconds, you would most likely have to ring the bell many times while you explore throughout every direction.

If you’re still having trouble finding them, it’s conceivable that you’re running into a problem or malfunction.

It’s possible that you should terminate the raid by switching your game mode to peaceful and then returning to normal.

How to find the last Pillager in a Raid

As it is, locating all the pillagers in a raid is quite tasking and tedious. Players often find the whole task to be irritating. To make things worse, sometimes players of Minecraft get hard stuck in pinpointing the location of the last pillager.

In this segment, we will be talking about certain tips and tricks which the players can use to locate the last pillager with ease.

Finding the last pillager can be really annoying. First, try ringing the bell which can be found in the center of the village.

What this does is that it lights up not only the pillagers nearby but also the ones which are far off.

Consequently, this makes finding pillagers much easier. However, if that doesn’t work for you then you could try turning on the subtitles.

Each time noise is made by the pillager, a subtitle will appear indicating which direction the sound originated from.

Turning on hitboxes( F3+b on java) could also assist players in the entire task of finding pillagers in a raid.

What are Pillagers Minecraft?

Pillagers are aggressive illagers equipped with crossbows who prowl the Overworld and engage in raids.

Illager’s are among the most violent mobs in Minecraft. They appear to be just focused on taking the power of the Overworld and loathe the tranquil villagers.

Gamers, iron golems, roaming merchants, and villagers are all prey for pillagers. In the Bedrock Edition, pillagers also are aggressive towards snow golems.

Pillagers strike by shooting arrows from their crossbows per three seconds up to 8 blocks away, and they pursue their victim throughout a 64-block radius.

They are exceedingly tough to get clear of due to their quick walking pace.

Pillagers and illagers never react against one another. Unlike many regular mobs, they continuously attempt to find out their assailant when attacked from some distance.

How to end Raid Minecraft

To terminate a Pillager raid with minimum harm inflicted to the town, Minecraft gamers are strongly urged to construct defenses.

For instance, erecting a wall made of wood or stone all across the village would prohibit any Pillagers from invading the village.

Although building might be time-consuming, walls would protect any people from being slain. Another smart approach to aid with the defense is to create lava traps.

One approach to halting a village raid would be to have the village utterly swept out. Clearly, it’s not the desired end, however, if the user fails to protect a town, all of the villagers would die and the raid would finish.

Gamers may also quit the raid whilst it’s ongoing, although, the Pillagers would pursue the player for a distance.

Raids would terminate after two to three Minecraft nights, and all Pillagers will be despawned.

Despite losing or having the raid terminate, the only method for a raid to terminate is to defeat it.

It should be a player’s moral obligation to seek to rescue the innocent villagers from a dreadful death, particularly given it’s their fault it happened in the first place.

Luckily players will get support from Iron Golems if there are any stationed in the village.

Besides creating defenses to assist aid in the Pillagers’ defeat, players must be equipped with iron/diamond gear and an enchanted bow.

Bows are particularly useful for the Ravagers, who deliver significant melee damage when up close.

Minecraft players would have to survive seven waves of Pillagers racing over to them to accomplish the raid.

If they succeed to overcome the waves, the raid will finish and they would be awarded the “Hero of the Village.”

1. How to find Pillagers in a Raid Bedrock

Firstly, attempt to strike the bell that could be located in the heart of the village.

But the light effect on the pillagers lasts just for a few seconds. So, you have to make sure that you ring the bell quite a few times so you can discover all the pillagers quickly.

Nevertheless, if it doesn’t function for you then you may try switching on the subtitles.

Every moment a noise is produced by the pillager, a subtitle will display showing which direction the sound came from. Turning on hitboxes( F3+b on java) might also help players in the whole work of detecting pillagers in a raid.

2. Can you befriend Pillagers?

To tame the pillager’s crossbow, one should first shatter it. Because a crossbow has a durability of 326, the pillager must use it 326 times before it collapses. So, put 5 shields and some food on your Hotbar to help you through the 326 bullets.

3. What is the duration of a raid?

Players could abandon the raid whilst it is active in the process, but the Pillagers would pursue them for a short distance.

Raids would expire after two or three Minecraft nights, and all Pillagers would despawn.

4. How do you annihilate a pillager outpost?

Once the villagers are gathered, you may either attract a Creeper or use TNT to blow them up. Multiple TNT blocks are more effective, but they also destroy the pillager drops.