There are a few important things to think about when picking out dance games for the Nintendo Switch. For starters, guarantee that players will have a good time playing the game. The point is to have a good time while dancing, therefore the game you pick should reflect that.

The choice of songs is also very significant. The finest dance simulators will provide a large music library from which to select. Look for games that get updated frequently with fresh tunes so you don’t have to listen to the same old songs over and over again.

With the release of Just Dance® 2023 Edition, a new age in dance has begun. Experience BTS’s groundbreaking “Dynamite” and other chart-topping tracks for the first time ever!

Enjoy a never-ending dance party with every update, thanks to year-round additions like online multiplayer, customization, rich 3D environments, and new songs and modes.

You may make it feel like you’re all sitting in the same room by hosting a Private Group and inviting up to five other participants. Locate fresh music, game options, and playlists. An improved UI makes all of your options readily available with just a single mouse click. 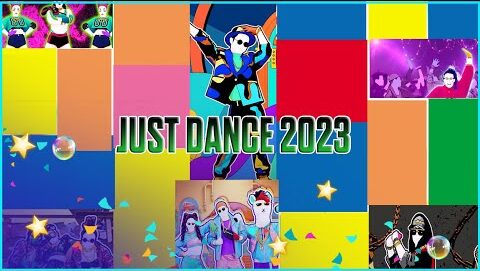 An excellent approach to kick off a good time is with Just Dance 2023 Edition for Nintendo Switch. This game is likely to be a good time thanks to its modern user interface and customizable features.

Various top-40 tunes are available for players to dance to, such as “Dynamite” by BTS, “Telephone” by Lady Gaga, “Therefore I Am” by Billie Eilish, and many more. Playing this game is a fantastic way to socialize while also getting some exercise.

With “Don’t Go Yet” by Camila Cabello, “Love Story (Taylor’s Version)” by Taylor Swift, and more, Just Dance® 2022 is back as the ultimate dance game with brand new settings and 40 sizzling new music from chart-topping hits!

With Just Dance® Unlimited Sweat mode, you can get in shape quickly while also creating your own dance routine.

The Just Dance 2021 Nintendo Switch game is fun for the whole family, especially those of us who like to get up and move around while playing.

Just Dance 2021 is the best way to get your body moving, with 40 brand-new must-dance tracks and the opportunity to build your own routines with the Sweat Mode.

You can also compete with other players online in an improved version of the World Dance Floor. The game is pricey, and additional fees are required to access all of the tracks.

Get in shape without leaving your house with Zumba Burn It Up for the Nintendo Switch. It’s a fantastic method to get in shape while having a good time, thanks to its portable nature, its over 30 tunes, its variety of dancing styles, its celebrity teachers, and its amazing aesthetics.

While the game’s motion detection isn’t quite as good as some other racing games and the soundtrack could use some variety, it’s still a fun and effective method to stay in shape.

The goal of Pride Dance Out & Proud is to honor LGBTQ+ people and the many Pride festivities held across the world. The world’s most recognizable cities are your dancefloor.

In Dance Mode, get your body moving, and in Rhythm Mode, be ready to make a difference in the world. Prideality’s “Dance Duels” can even turn your hating employers into your most devoted supporters.

Listen to these dancing versions of tracks from the Monster Hunter Rise soundtrack and get your groove on!

You can get the material by talking to the Courier after you pay for it and then choosing Add-on Content. Then, you may apply it in the Housekeeper menu’s Room Customization submenu.

Just Dance Unlimited gives you access to over 200 songs and monthly fresh content for an entire year.
Feel free to shake it with the Joy-Con controllers or your mobile device.

Enjoy yourself while you dance with these wacky game modes:

You can easily make new pals in Ooblets. Restore your farm, take part in a dance-off, plan your dream home, and save Badgetown from the Mayor’s evil plans.

Features Dress up your avatar however you choose with a wide selection of fashionable garments and extras.

Create delicious dishes from your farm’s alien crops and sell them throughout town.

Create a squad of ooblets, then engage in card-based dance battles against other players to gain experience and unlock new dances.

You’ll have plenty to do between the daily challenges, dancing tournaments, townie missions, and badges.

Just buy stuff and be nice to the slightly off people who live in Badgetown.

Get started with a dilapidated shanty and build a magnificent house with a wide variety of decorative elements and furniture sets.

You play the role of Danger Mouse, the world’s finest secret agent, in Quark’s new reality TV show, The Danger Games, a race battle of historic proportions. Hurtle around the city streets at high speeds, fight off opponents, and avoid explosives in your pursuit of victory.

How safe do you think your chances are of reaching the end without any injuries?

Take control of your favorite characters from the popular BBC show Danger Mouse, such as the title character, Jeopardy Mouse, Colonel K, Penfold, and a whole variety of other heroic mice and villainous critters.

With each victory, you’ll unlock additional character and item cards, giving your team more options for attacking in races and improving their stats overall.

When playing the game’s primary mode, players take on the role of a girl and must match the on-screen button prompts to perform various dance moves. If the player keeps dancing after the girl’s mother enters the room, the game will end.

When mom comes in, it’s game over if you don’t stop dancing. The player can dance to one of ten songs, and there are three levels of difficulty for each song.

After completing a song, the player is rewarded with coins that can be spent in the game’s gashapon machine on further content, such as additional song choices or playable characters. There’s also a two-player cooperative mode in the game.

Toree 2 is the follow-up to the unexpectedly popular 3D platformer Toree 3D, and it expands on the original’s strengths in areas like fast-paced action, level design that emphasizes fluidity, and adorable outfits (two this time).

Rapid-fire gameplay with a focus on level flow

Strange components are once again present.

There are 9 tiers, each with its own set of challenges and rewards.

Here are some hidden symbols to use

This is it, the climax of the ice cream saga