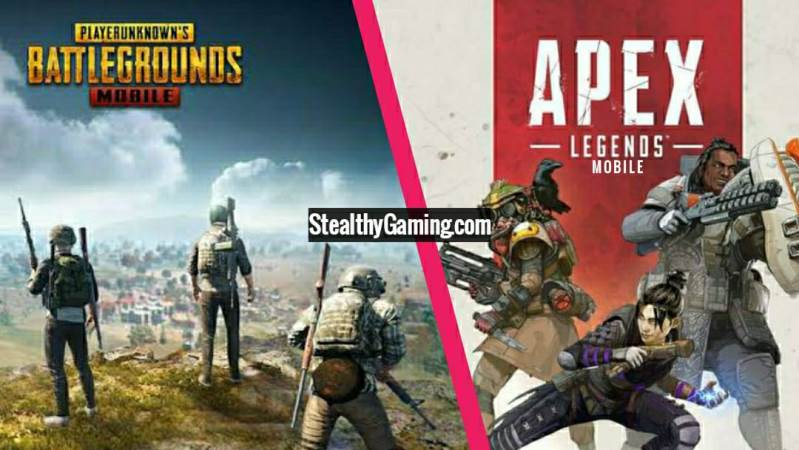 Player Unknown’s Battlegrounds Mobile or better known as PUBG Mobile is the game where it all started. PUBG Mobile was one of the first FPS Battle Royale games to have ever been launched on the mobile platform.

PUBG Mobile is available free to play on both the iOS and Android platforms. PUBG Mobile has done a remarkable job of converting the PC and console experience of the main games into mobile experiences.

World-renowned Titanfall-makers Electronic Arts (EA) Inc and Respawn Entertainment are responsible for giving birth to the hugely popular and recognized Battle Royale Game – Apex Legends. Apex Legends sort of came roughly out of nowhere in February 2019, hitting the circumstance with little to no build-up or accolades

Since both the games are quite popular amongst players all across the world, we will be drawing a comparison between the mobile versions of both games. So, let’s dive right into it.

Right of the bat, we would like to inform all you guys out there that Apex Legends is currently only available on platforms like the PlayStation, Xbox, PC. It is yet to make a debut on the Mobile Platform. However, that is under development as we speak. Apex Legends Mobile’s release has been announced officially.

That being said, Apex Legends is primarily a Battle Royale game. So, it is highly probable the mobile version also follows in those footsteps. So, let’s draw the differences between both games.

The characters in PUBG mobile are based on real humans. However, sometimes you might mistake them for something out of this world. But those are only the wild skins that Pubg mobile offers for its players.

The Apex Legends characters are very separate from the characters featured in PUBG Mobile. The characters in Apex Legends are called Legends. Since the game is based in a parallel reality – Kings Canyon, the fighters of that alien-land go by the title Legends.

Even though there is a huge assortment of maps available in PUBG Mobile, all of the maps are quite realistic and are adopted from real-life surroundings found on earth. Erangel is the average grasslands, Miramar is more based around a desert, Vikendi is based in the snowy regions so on and so forth.

That being said, it is rather different in the case of Apex Legends. Kings Canyon is the name of the BR Map in Apex Legends. This map has some very fascinating characters like Leviathans (terrific dinosaurs that don’t intervene in the matches), Flyers, (Charizard-like creatures which when shot at drop loot crates).

The whole environment looks kind of revolutionary as if human civilization leaped 100 years into the future but ended up taking along with some things from the past too.

Weapons in PUBG Mobile are very much real and can be found in real-life environments too. They have all been adopted from the real-life versions of those weapons. Some of the weapons are also from the bunch of widely used weapons in the militaries of various countries.

This allows players to get an idea of how the weapon functions in reality. Even the attachments and gear that are used for the weapons are all very realistic and have been adopted from their real-life counterparts.

The guns are very different in the case of Apex Legends. You can’t find them if you head into an arms and explosives depot. They are very future-oriented and also fuelled by Energy by off-world ammo. Most weapons showcase cool Energy and plasma bolts and lighting, which you likely won’t find in actual life.

The revive system in the Battle Royale mode of PUBG is quite traditional. If a teammate gets knocked down, then the fellow teammates can revive him. However, if the player doesn’t get revived and gets killed then he no longer can take part in the match. The player is more than welcome to spectate though.

In Apex Legends, players on getting knocked can get revived by remaining teammates. Additionally, if they die without getting a chance to get revived, the other teammates can retrieve their banners and can bring them back using a revive beacon. The revive flight will bring their dead teammate back into the action.

Since we have established in the above-mentioned points that PUBG Mobile is more inclined on making their game look and feel more realistic, the same goes for vehicles.

The vehicles in PUBG Mobile are some of the vehicles which one can find in their day-to-day lives like Sedan, SUV, Motorcycles, etc. They sure prove quite vital whilst traversing the map and evading enemies or the zone.

In the case of Apex Legends, it doesn’t provide its players any automobiles at all. There’s a train that runs like clockwork, which you can’t monitor. But besides that, Apex Legends does not include moving cars. You can glide into the needed locations through vertical ziplines and that’s the only way to get around Apex Legends.

The Armour system in PUBG is somewhat different from that in Apex Legends. In PUBG, players get three different tiers of armor both for the head and for the torso. They are the Level 1, 2, and 3 armors.

But the twist is once an armor takes damage and its ability to give extra protection depletes, it can’t be recharged. You have to find another armor. Probably even a better one which is difficult to come across.

In the case of Apex Legends, you recharge your depleted Armor by using Shield Batteries. Apex Legends provides its players 4 tiers of armor for the torso and the head namely – Common, Rare, Epic and Legendary. But all of them can be recharged using shield batteries.

PUBG Mobile offers players the opportunity to select whether to play in the FPP or TPP format. It supports both of them, however, in the case of Apex, the game just facilitates FPP Mode indicating you can’t see your character in the third person, except while delivering the finishing move.