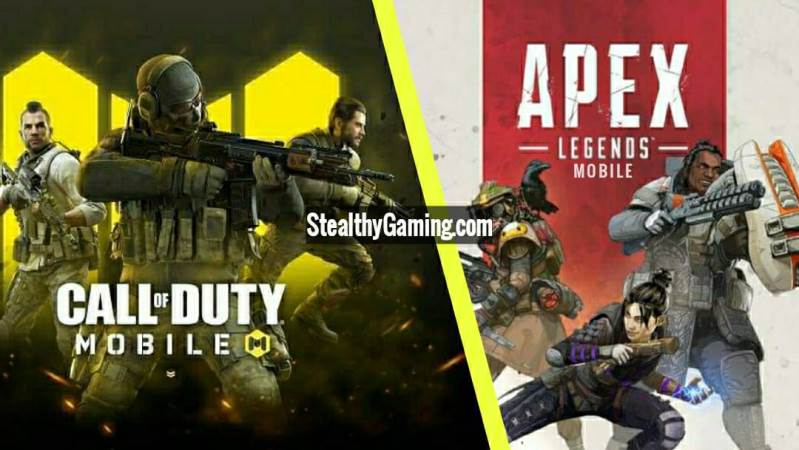 Call of Duty Mobile is by far one of the most successful FPS games that we have come across on the mobile platform. Ever since the ban on PUBG Mobile, COD Mobile soared to success. That being said, the brand Call of Duty has been satisfying the gaming community for generations.

The Devs of COD Mobile keep on adding weapons, characters, maps, modes, and much more to the game on a consistent basis, to keep the players engaged and entertained. Currently COD Mobile is in its 14th Season which is called the Season 1 New Order and the Devs don’t seem to be running low on creative ideas.

Call of Duty Mobile, since its launch back in October 2019, has proven to be very competent as far as Mobile FPS games go. However, we believe it is soon to expect some tough competition from another game that is about to set foot in the Mobile FPS gaming universe. Let’s break it down.

Apex Legends is Electronic Arts’ take at the widely recognized Battle Royale genre of gaming and a quite prosperous one. Apex Legends sort of came roughly out of nowhere in February 2019, hitting the circumstance with little to no build-up or accolades – though if it seems familiar, that’s because this Battle Royale is made by Respawn and is set in the Titanfall universe

Well, this beast of a game is currently available on platforms like the PlayStation, Xbox, PC. It is yet to make a debut on the Mobile Platform. However, that is under development as we speak. Apex Legends Mobile’s release has been announced officially.

The characters in Apex Legends are quite different from the ones which we find in COD Mobile. In Apex Legends, the characters are knowns as Legends. Since the game is based in a different universe – Kings Canyon, the warriors of that alien-land go by the name Legends. In COD Mobile, there are countless characters, each different in its own way. However, the difference is just limited to physical appearance and not their abilities. In the case of apex legends, each character has different powers and special abilities. If one character is good for taking fights head-on, another one might prove useful while evading.

However, it is quite different in the case of Apex Legends. The BR Map in Apex Legends is known as Kings Canyon. This map has some really interesting features like the Leviathans (huge dinosaur-like creatures that don’t interfere in the match), Flyers (Charizard-like creatures which when shot at drop loot crates). The whole atmosphere looks kind of futuristic as if civilization jumped 100 years into the future but took along with some things from the past too. Both COD Mobile and Apex Legends have a humongous weapons arsenal. However, in the case of COD Mobile, all weapons are based on real-life versions of those weapons. COD Mobile sure has a bad habit of introducing them into the game under pseudonyms, however, we are sure you can find weapons of similar like and build in any army inventory.

In the case of Apex Legends, the weapons are really different. They are not something which you can find if you walk into a guns and ammunition depot. They are quite futuristic and are often fuelled by out-of-this-world type ammo like Energy. Most weapons showcase cool Energy and plasma bolts and lighting, which you can’t find in the real world.

The Revive System used in COD Mobile has been adopted from Apex Legends. Especially the part where you can pick up dog tags and scan them to revive your dead teammates via the revive flight in BR mode of COD Mobile.

It is pretty much similar in Apex Legends except for slight cosmetic changes. In Apex Legends, instead of Dog tags, they are known as banners and the banner system is what allows you to revive dead teammates via Revive flights.

Now, this is a field where the two games behave like 2 different polarities. There is a truckload of differences here. In COD Mobile you can find vehicles like Motorcycles, Boats, ATVs, Helicopters, Tanks pretty much all the vehicles which you can associate with the militaries of different countries. They are all very realistic and make traversing around the map fun.

In the case of Apex Legends, it doesn’t provide its players any vehicles at all. There is a train that just keeps running like clockwork you have no control over it. But apart from that, there are no drivable vehicles in Apex Legends. There are vertical ziplines that will propel you into the air and you can then glide to your required locations, that is the only way of traversing in Apex Legends.

Both COD Mobile and Apex have similar armor systems in the BR Modes. There are just subtle differences. In the case of COD Mobile, the armor system includes the player equipping themselves with armor plates, which are quite realistic and one can often find them similar to Kevlar vests.

In the case of Apex Legends, you recharge your depleted armor by using Shield Batteries. Like we mentioned before, it is all futuristic in Apex Legends and there are elements of plasma and energy discharge in almost all features.

COD Mobile allows players to choose whether they want to play the game in FPP mode or in TPP Mode. It supports both of them, however, in the case of Apex, the game only supports FPP Mode meaning you can’t see your character live in action in Apex, except while delivering the finishing move.