Combat Warriors is undoubtedly one of the greatest battle simulation games available on Roblox, despite the fact that there are many others. If you’re searching for a battle-royale simulator, this is especially true.

In addition, Roblox Combat Warrior’s central idea contains a lot of combat, as the game’s name would imply. You can also check out Roblox Fighting games.

Even though it might seem obvious, it is crucial to avoid approaching adversaries when playing.

They will parry your attack if you do this. In Roblox Combat Warriors, it’s also a good idea to constantly move about; any type of mobility, such as sprinting, leaping, or rolling, might be advantageous to you.

How to get Cat in Combat Warriors: Roblox 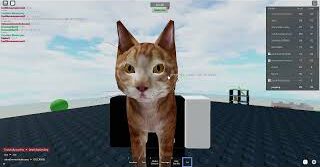 Short Answer: The cat is completely free and cannot be purchased in Loadout. You can only get the cat by entering “/getcat” in the game’s chat window.

To tell you the truth, obtaining a cat in Combat Warriors is not a difficult or hard process at all. Entering the command /getcat is all that is required of you in order to receive the cat. After that, the kitty will be placed in your care and handed to you to handle.

You don’t need to be concerned; even if you have a cat in your inventory, you’ll still be able to quickly swap to a different item or weapon with just one click whenever you want to.

Also, keep in mind that a cat will not be sent to you in an indefinite manner. In the game Combat Warriors, there is no way to permanently obtain a cat. After you have successfully reconnected to the game, the cat will no longer be visible, and you will need to execute the command one more time.

The reality is, though, that the cat is not one of those things that can brag about having a considerable amount of capability. This adorable animal is not one that can be transformed into a cat, tamed, or interacted with in any way.

The only thing that the normal cats in Combat Warriors do is emit a noise that is really irritating. Because of this, if you wish to utilise a cat in Combat Warriors, it is strongly suggested that you turn the in-game volume off.

Therefore, the only way to employ the cat effectively is to aggravate the other players. You may be certain that any gamer will find such an irritating sound that the cat makes to be bothersome. That is the way things are.

What does a Cat do in Combat Warriors: Roblox

The cat is a useful item that may be acquired in Combat Warriors. It has a fur color that is somewhere between dark orange and red. The player will receive a customized message upon receiving it that says “Cyanitem blesses you.” This message is just viewable to the player and no one else.

The cat can only be gotten once for each spawn it appears in. If the player attempts to use the command while already carrying the cat in their inventory, they will get a warning that warns them not to be “greedy!”

After being activated, the cat will swell to around 1.5 times its normal size, emit an extremely grating and warped meow, and then shrink back to its normal proportions.

In light of this, it is important to remember that while playing Roblox Combat Warriors, you have access to a wide variety of tools, such as the Kunai, C4, Bear Trap, Frag Grenade, and Ghost potion.

For instance, using a Ghost Potion will render you invisible for a certain amount of time, which you may then use to sneak up on and attack other players who are participating in Combat Warriors. Therefore, you should make advantage of these priceless in-game materials.

Roblox Combat Warriors offers two distinct categories of online battlegrounds in anyone to participate. The first one is called the Beginners Level, and it’s designed specifically for novice players to get used to the controls. Understand the fundamentals of the game’s gameplay, and earn credits via grinding.

The second level is the Standard Level, and it is here that seasoned players may test their mettle against one another. Demonstrate their abilities, and win badges. Here are some hints and suggestions that will help you enhance your game, regardless of whether or not you are a beginner.

In conclusion, if you play Combat Warriors long enough, you will eventually obtain a cat. In just a few moments, you will be able to make use of the unique command within a conversation. However, the catch is that there are almost no real-world uses for the cat.

We appreciate you taking the time to read the instructions. We really hope that it will be of use to you.