COD Mobile is one of the mainstream games in the battle royale genre on the mobile platform, which revolves around survival as the last man on the battlefield. Several players drop together onto an island and fight it out to be the champions.

This game provides both BR and multiplayer modes and provides unique features such as rewards, titles, and medals that reflect the prestige and expertise of a player.

COD Mobile includes 86 medals, 27 of which can be earned in Battle Royale mode. Players can gain it by carrying out a certain task or several tasks. The Road Rage Medal is one of those medals and today we will be talking about how players can earn themselves the Road Rage Medal.

Trending: What is Epic Weapon in COD Mobile Battle Royale?

How to get Road Rage medal in COD Mobile?

The Road Rage medal is an achievement that can only be earned in Battle Royale matches of COD Mobile. To get the Road Rage medal, players have to eliminate 4 or more enemies with a vehicle. Kill in the Warfare Mode will not be counted.

The Road Rage medal might seem tricky to earn considering that it is difficult to run over four enemies in Battle Royale with a vehicle. However, it is certainly doable.

COD Mobile has yet again updated the Seasonal Events section. The “Take the Wheel” event of Seasonal events consists of a series of tasks. Completing those tasks will fetch the players, certain cosmetic reward. 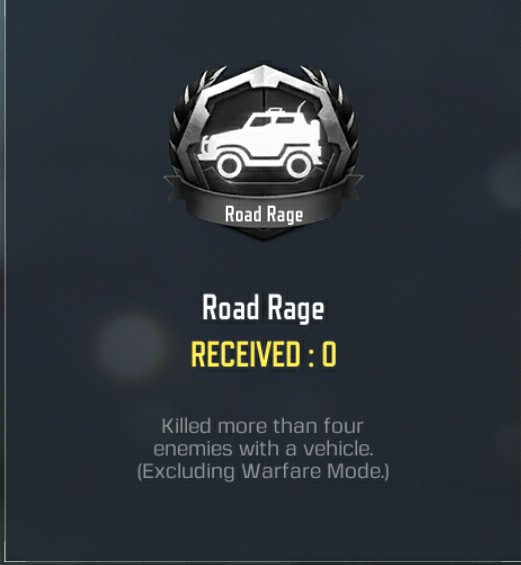 One of those missions includes Earning the Road Rage Medal once in Battle Royale. We know it sounds tedious to complete the requisite task. However, we do have a simpler way for you.

Must Read: What is Flinch Stability in COD Mobile

Instead of scouting the map for vehicles and enemies to run over, you can simply do the following:

This way you can easily earn the Road Rage medal in Battle Royale by investing the least time and effort.

COD Mobile is on fire with the Seasonal Events. So make sure you complete all the missions to unlock each and every reward.